algoWatt, a GreenTech Company listed on the Euronext Milan market of Borsa Italiana, with reference to the announcement made on 21 June 2021 regarding the approval of the Recovery Plan and the signing of the Restructuring Agreement, informs that it has completed – before the expected deadline of 31 December 2021 – all payments to creditors (banks and bondholders) for approximately Euro 6 million, as provided for in the aforementioned Agreement with reference to that deadline. As a result of these fulfilments, the debt to the Banks was written off by approximately Euro 5 million, with a reduction in algoWatt’s financial debt as at 31 December 2021 of approximately Euro 11 million.

In particular, it is announced that:

Lastly, it should be noted that by the scheduled date of 31 December 2021, AlgoWatt had completed the disposal of assets that were no longer strategic in accordance with the terms, conditions and values set out in the Reorganisation Plan. In particular, it should be noted – as already announced on 7 December 2021 – that the Company has completed divestments for a countervalue (net proceeds of divestment) of no less than Euro 9 million (covenant “Financial Parameter 2021”).

END_OF_DOCUMENT_TOKEN_TO_BE_REPLACED

“Italeaf, by the summer, will be of the first Italian company listed on the Swedish market – said the Chairman, Mr Stefano Neri – Our choice is made for a number of reasons: first of all, for the sensitivity of Nordic investors for clean technologies, innovation and social responsibility. And then for the steady growth of interest in Nasdaq OMX, a market that is catalyzing attention for the rapid growth in Europe, but not yet fully appreciated in Italy. Finally, to avoid overlap between Italeaf and TerniEnergia, which already operates in the Star segment of Borsa Italiana, owned by LSE. The shareholders’ meeting decided on the placement price, that will be 2.5 euro per share. Ourhe goal is to continue to create value, broad the shareholder base and increase the brand awareness. Italeaf wants to to represent an attractive factor for new businesses and startups in the areas of high innovation, technology and reducement of environmental impact”.

END_OF_DOCUMENT_TOKEN_TO_BE_REPLACED

TerniEnergia: exercised the call option on 30% of Lucos Alternative Energies, acquired 100% of the ESCO UNI CEI 11352

TerniEnergia SpA, a company active in the fields of renewable energy, energy efficiency and waste management, which is listed on the Star segment of Borsa Italiana, as part of its strategy of strengthening in the areas of smart energy and energy efficiency, has exercised the call option granted by the present shareholders[1]by the agreements entered into on August 10, 2011, completing the acquisition of the remaining 30% of the sharecapital  of Lucos Alternative Energies ESCO UNI CEI 11352 certified.

“The transaction – said Stefano Neri, Chairman and Chief Executive Officer of TerniEnergia – is a part of the company strategy aimed to support, alongside the international development in the photovoltaic industry, a new stage of expansion in sectors with high growth potential, such as industrial scale smart energy and energy efficiency. Alongside the acquisition of 100% of Lucos Alternative Energies, in fact, TerniEnergia continues negotiations for the acquisition of Free Energia SpA, which in the intention of the Group will allow for completion of the downstream value chain of power generation plants owned by the company. Thanks to the sales network of the same Free Energia, TerniEnergia’s power generation assets and the ESCO activities performed by Lucos, we are confident to perform strong potential synergies and opportunities for the integration of the business, which will be the basis for a growth in industrial activity in this area and for the enhancement of the energy production from renewable sources”.

The price for the transaction is equal to Euro 1,952 million entirely financed by cash.

TerniEnergia: won the national tender organized by Ecopneus for the recovery of end of life tires (ELT) for the years 2015-2017 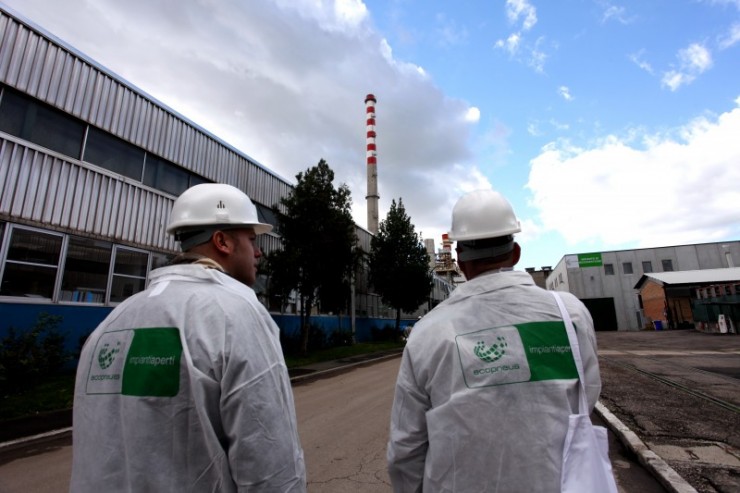 TerniEnergia SpA, a company active in the fields of renewable energy, energy efficiency and waste management, which is listed on the Star segment of Borsa Italiana, won the national tender organized by Ecopneus scpa, the no-profit company for the tracking, collection, treatment and final destination of End of Life Tires (ELT) created by the major tire manufacturers operating in Italy, for ” granulation/crushing activities of ELTs (ERC 160 103) for the period 2015-2017”.

“This is an important recognition of the Company’s leadership in the field of environmental business and economic activity in the field of the recovery and recycling of materials – said Stefano Neri, Chairman and Chief Executive Officer of TerniEnergia –. It is even more remarkable that this acknowledgement comes from Ecopneus, a positive example of how is possibile to integrate the requirements of environmental protection and sustainability with the creation of economic value and employment. TerniEnergia confirms its intention to continue the process of strengthening the scope of the environmental assets, completing a new plant for the treatment and recovery of “secondary raw material” of end life tires (ELT) in Northern Italy. The implementation of the second plant will allow us to double the treatment capacity and to achieve a market share of approximately 20% of the national market“.

TerniEnergia can receive in Nera Montoro (TR) plant up to a total of 15,000 tons of PFU delivered only by Ecopneus for a three-year aggregate revenues of Euro 4.1 million. The Nera Montoro PFU treatment plant has a capacity of about 20,000 tons/year and receives materials for crushing and recovery of secondary raw materials (granulate and crumb rubber and wire steel) by other consortia collectors and private operators .

In 2013, Ecopneus avoided emissions by 347 million metric tons of CO2 equivalent through the use of recycled rubber in place of virgin rubber, 3.2 billion kWh of energy saved; 1.3 million m3 of water consumed in the production cycle of virgin rubber, steel and other components of the tire.

ATC SERVIZI, a company wholly public that operates in complementary services related to mobility and manages through an “in house” service agreement the development plan of the “A. Leonardi” airfield in Terni (Italy), and Skyrobotic, an italian company based in Terni, active in the development, mass production and commercialization of unmanned aircraft systems (UAS), part of Italeaf group, have signed an agreement for the use of logistic services and assistance to the flight of the operating area and air space “protected” (Notam) of the Terni airfield for experimental activities and training on the mini and micro drones for domestic and commercial use, in accordance with recent ENAC Regulations “means Aircraft Steering Remote “.

In particular, Skyrobotic is going to carry out at the airfield of Maratta, in Terni, experimental activities for research and development in order to obtain approval of unmanned aircraft systems products, training and enabling the use of drones with theoretical courses pertaining to the “Rules of the Air” (Civil Aviation Authority regulations) and operational training courses and programs with applications relating to specific job functions related to the use of UAS and drones, or photogrammetry, video inspections, etc..

END_OF_DOCUMENT_TOKEN_TO_BE_REPLACED

TerniEnergia: signed contracts for the construction of two photovoltaic plants in the Republic of South Africa for a total installed capacity of 148.5 MWp 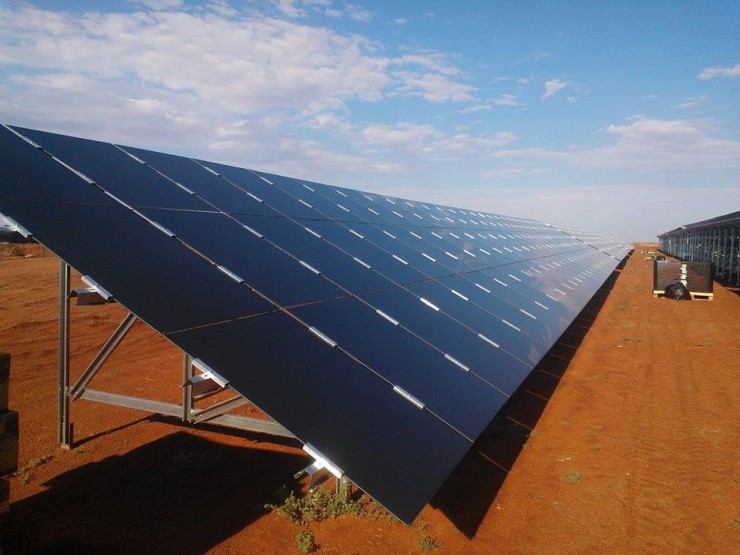 TerniEnergia, a company active in the fields of renewable energy, energy efficiency and waste management, listed on the Star segment of the Italian Stock Exchange, as part of the process of internationalization of photovoltaic EPC business, has signed two definitive agreements for the EPC (engineering, procurement and construiction) and O&M (operation and maintenance) activities with a primary European utility for the construction in South Africa of two industrial size PV plants for the total power capacity of 148.5 MWp.

In particular, the contracts following the framework agreements communicated to the market on October 31, 2013, and concern the installation by TerniEnergia Projects PTY Ltd, a South African subsidiary of TerniEnergia, of two photovoltaic plants with “EPC Contract” (turnkey) with the supply of panels and inverters, respectively, in  Paleisheuwel for an installed capacity of 82.5 MW and in Tom Burke for 66 MW, for a total consideration of approximately ZAR 2 billion, corresponding to the current exchange rate to approximately Euro 147 million.

The effectiveness of the two contracts is subject to the signing of the financial closing between the final customer company and the South African Government (Department of Energy). Because of this circumstance, the time schedule of the start of construction sites, previously announced opening within the month of August, 2014, is deferred to the date of the agreement that will be determined by the South African authorities. TerniEnergia, therefore, has taken immediate steps for the human resources management, requesting access to the italian institution of Ordinary Earnings Supplement Fund.

Pursuant to art. 2.6.2 of the Rules of Borsa Italian SpA, TerniEnergia announced that, in addition to what is stated in the Calendar of Corporate Events 2014 released last February 6, the Board of Directors for approval of the Half-yearly financial report as of 30/06/2014 will be held on August 7, 2014.